What is radon gas? The science tells us Radon is a cancer-causing radioactive gas. You cannot see, smell, or taste radon, but it may be a problem in your home or business. The Surgeon General warns that radon is the leading cause of lung cancer for non-smokers and second leading cause for smokers in the United States today. If you smoke and your home has high radon levels, you are at high risk of developing lung cancer. The science of radon exposure indicates children are more sensitive to radon due to their higher respiration rate and rapidly dividing cells, which may be more vulnerable to radiation damage. Learn more about radon testing here. Marie Curie won her two Nobel Prize in Physics and Chemistry for research into the radioactivity of uranium and radium, which becomes radon gas. This is why radon levels are measured in picocurie per liter of air (pCi/L). 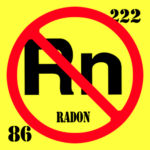 A family whose home has radon levels of 4 pCi/L is exposed to +/-35 times as much radiation as the Nuclear Regulatory Commission would allow if that family was standing next to the fence of a radioactive waste site.

An elementary school student that spends 8 hours per day and 180 days per year in a classroom with 4 pCi/L of radon will receive nearly 10 times as much radiation as the Nuclear Regulatory Commission allows at the edge of a nuclear power plant.